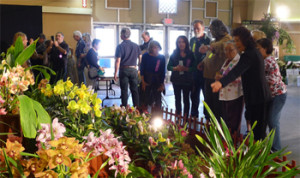 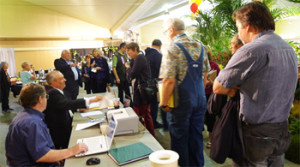 SANTA BARBARA, CALIFORNIA (February 26, 2016) –  Winning a trophy or award at the Santa Barbara International Orchid Show is quite an accomplishment. There are thousands of blooming plants on display and competition in many judging categories is fierce.

Judges have the challenging task of awarding exceptional plants that are being exhibited at the 2016 Show.  “We have an incredible group of display judges this year.” States Show Manager, Nancy Melekian.   “Each of them represent a broad spectrum of floral, design and display knowledge and expertise and we are delighted to have them on board for our 2016 Show.”

Below is a brief synopsis of each of our all-star judge panel:

Sandra Tillisch Svoboda – Sandra is the president of the World Orchid Conference Trust, immediate Past President of the American Orchid Society, and current chair of the AOS Education Committee.  Sandra is an accredited judge in both the American Orchid Society and the Cymbidium Society of America judging systems and is treasurer of the AOS Pacific South Judging Center.

Tim Estes -Tim, CFEE (Certified Festival & Event Executive), is President of Fiesta Parade Floats, is a well-known name in the parade float building industry. Tim has led Fiesta Parade Floats in being the highest prize winning rate float company in the Rose Parade for the last 27 years, including a record 22 Sweepstakes winners in a row for the best float each year in the Rose Parade.

Jim Hynd -Jim is a founding member of the American Institute of Floral Designers (AIFD) and the recipient of AIFD’s 1998 Award of Distinguished Service to the Floral Industry. Jim is a frequent guest speaker and judge at major floral seminars, exhibits and competitions. He holds the position of Flower and Garden Coordinator for the Los Angeles County Fair.

Virginia Hayes – Virginia is the curator of the Living Collection at Ganna Walska Lotusland. Before coming to Lotusland in 1992, Virginia managed Santa Barbara Water Garden Nursery, specializing in aquatic plants, and owned a pond maintenance business. In 2002, she completed a Master’s degree at UCSB, researching the unique floral characters of lotuses (Nelumbo nucifera) and their variation among wild populations.

Rocky Pollitz AIFD –Rocky is the President of the Inland Floral, President of FTD District, President of the Riverside Soroptomist Club and Vice President of Riverside Girl Scout Council. She went on to become a trustee on the PFCI (Professional Floral Commentators-International) and President of the prestigious American Institute of Floral Designers. For many years she worked seasonally on the Rose Parade in Pasadena California for Fiesta Floats. She has had the honor of working at the White House for many Presidents as a designer for various events such as parties for famous dignitaries, Christmas in the White House and numerous Inaugurals Balls.

Valerie Rice -Valerie Rice is an avid home chef, gardener and host with a signature California style. Val authors a popular lifestyle blog, Eat-Drink-Garden, where she encourages readers to live life deliciously.  Her witty wisdom is shared nationwide in places like Sunset Magazine and Access Hollywood Live where she divulges her best tips, recipes and entertaining recommendations on living the good life, one bite at a time. Val has served on the Board of Casa Herrera and is currently enrolled in the UCCE Master Gardener program for Santa Barbara County.   Val is a California native and her home in Santa Barbara is a major part of every post you see on her popular blog, be it her garden, the farmers market, the architecture or natural beauty.

Santa Barbara International Orchid Show is open Friday, March 4 through Sunday, March 6 from 9 a.m. to 5 p.m. daily at Earl Warren Showgrounds, located in Santa Barbara at Highway 101 and Las Positas Road. General admission is $14; seniors, students with ID and advance group sales (minimum 25) are $12; and children 12 and under are free with an adult. Tickets are available in advance at www.SBOrchidShow.com.