The American Orchid Society article “Orchids on the American Riviera” details the history and personalities involved with the Show.

Nestled on a narrow plain between the rugged Santa Ynez Mountains on the north and the calm, blue seas of the Pacific Ocean on the south, Santa Barbara enjoys a mild, Mediterranean climate with temperate nights and soft, ocean breezes.

From this splendid setting has sprung an orchid industry that now produces more orchids than any other region in the country. Many of the growers introduce their finest blooms at the Santa Barbara International Show before sending them out as potted plants, cut-flower sprays and individual corsages to orchid enthusiasts throughout the world.

Orchids in Santa Barbara took root at the turn of the century, when wealthy industrialists came to the area’s burgeoning spas and resorts to escape harsh, eastern winters. Many visitors stayed on, building estates and commissioning world-class horticulturists and landscape architects to design elaborate gardens.

Exotic orchids became the rage, with mass plantings of Cymbidiums and other unusual species adding prestige to Montecito and Hope Ranch estates.

The forerunner of the Orchid Show, organized as part of a flower show by the Santa Barbara Horticultural Society under the direction of Bert Kallman, took place in 1945 at the Montecito Grange Hall.

As orchid growing in the Santa Barbara area by both commercial growers and hobbyists continued to expand, the premier show was welcomed as an ideal showcase for the area’s top orchids. The next year, more than $200,000 worth of orchids vied for top honors at the Santa Barbara Cymbidium Show, which was staged as a “Garden of Eden” at the Carrillo Recreation Center in downtown Santa Barbara.

In 1947, the show moved to the State Armory on Santa Barbara’s Eastside. During the early and formative years of the event, local cymbidium grower Eliot Rogers managed the Show. He had strong connections within the local orchid community, as well as orchid establishments in England, and was able to obtain prized cymbidiums from the U.K. in both pre- and post-WWII times. Known to be a keen judge of cymbidiums, he possessed one of the finest cut-flower collections of his day.

The show moved to its present location, Earl Warren Showgrounds, when the rotunda building opened in the early 1960s. Throughout the years, the rotunda and exhibitor hall have played host to some of the finest orchids in the world.

Just after World War II, Signal Oil magnate Samuel B. Mosher helped to cement Santa Barbara’s status as an orchid empire by spending $1.5 million to assemble one of the world’s finest breeding collections at his Dos Pueblos Orchid Company. Other growers paid tens of thousands of dollars to acquire stud plants as well.

Today, with the advent of mass retailing of orchids and high-tech laboratory techniques that make possible the cloning of a wide variety of orchids, orchid prices have dropped. The beautiful flowers are now far less expensive and more readily available. 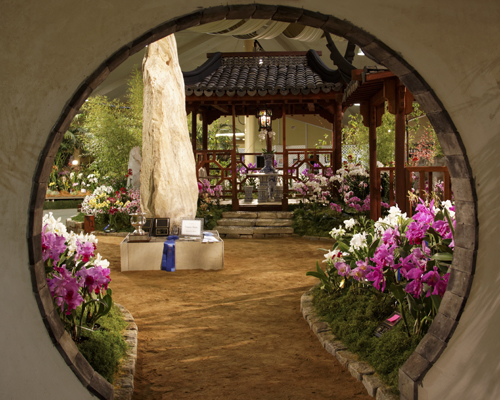